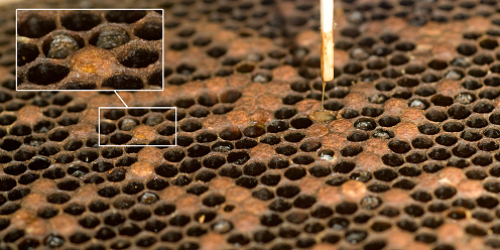 American foulbrood or AFB is by far the most virulent brood disease known in honey bees. The reason for this is the causative organism forms heat- and drought-resistant spores, capable of germinating in a favorable environment at any time. High incidences of this disease in the past have led to the bee inspection programs now present in most of the United States.

The disease is caused by the spore-forming bacterium, Bacillus larvae. It attacks older larvae and young pupae, which are literally digested by enzymes secreted by the bacterium. Infected individuals turn brown, then black, the resultant mass becoming a hard “scale” of material deposited on the side of the cell.

The symptoms of American foulbrood include:

– A characteristic odor, sometimes described as sour or “of a glue pot.”

– Resultant black scales, difficult to remove from the cell because of their stickiness. The scales may exhibit adult characteristics like legs, heads or tongues, which are clearly diagnostical for this particular disease.

Diagnosis of American foulbrood requires experience, often only available from a trained bee inspector. The “ropy” test can be used to make a preliminary diagnosis. A stick or twig is inserted into the cell and then withdrawn; the affected larvae “sticks” tenaciously and the contents can be drawn out into a long string or “rope.” The Holst Milk Test another possible test. An affected individual or scale is swirled in a weak solution (1%) of skim milk. If the milk clears, American foulbrood is suspected. Finally, a brood sample may be sent for microscopic diagnosis to:

Transmission of American foulbrood is possible in a number of ways, including feeding infected honey and pollen, using contaminated equipment, and installing infected package bees or queens. Because honey from unknown sources is always suspect, use of sugar syrup to feed bees is preferable in almost all circumstances. It is recommended that hands and hive tools be kept as clean as possible at all times to avoid possible contamination among colonies.

Because the spores can remain viable (capable of germination) for so long, most states require bee colonies with American foulbrood to be burned upon discovery. Some, like Florida and Georgia, pay a small indemnity, others do not.

Prevention of American foulbrood is accomplished by good management procedures (this may include eliminating colonies that are suspected of having the disease and/or feeding an antibiotic). The only antibiotic legal to use at present is oxytetracycline. Terramycin, a registered trademark of Pfizer, Inc., is generally available at bee supply houses.

A great deal of controversy exists concerning feeding antibiotics to honey bee colonies for prevention of American foulbrood. Most large-scale beekeepers find it more efficient to routinely treat their bees. On the other hand, many small-scale operators do not follow such a feeding program, preferring instead to let symptoms appear and then have the bee inspector diagnose and then burn the colonies and collect the small indemnity fee (not available in all states). This removes disease reservoirs and eliminates susceptible stock, not possible where preventative feeding with antibiotics effectively may mask all symptoms. Generally speaking, once a decision has been made to feed antibiotics, such a prevention program must become a permanent part of the operation’s activities. Finally, if antibiotics are not fed, this eliminates any risk that they will contaminate a honey crop.

There is a general lack of agreement among researchers, regulators and others concerning effectiveness of preventative feeding as a desirable disease control policy. Consequently recommendations may vary widely. For a more detailed discussion on the matter, consult appropriate sections in:

Most authorities agree that the approved dosage of oxytetracycline hydrochloride is 200 milligrams per one ounce feeding. Several formulations are presently available and are named based on the amount of active ingredient (i.e. TM-10 = 10 grams active ingredient per pound). TM-25, simply called Terramycin Soluble Powder (TSP), can be fed in syrup. The other formulation (TM-10) is not soluble in water and must be fed as a dust. At least one formulation of oxytetracycline already mixed with a carrier can be purchased from bee supply outlets.

The general rule to follow is feed according to the instructions on the label. The label is the law and must be followed to the letter. Unfortunately, the label is often missing from small portions of the product and confusion may result. According to the latest information on the Pfizer label for (OXYTETRACYCLINE HCL) Terramycin Soluble Powder #60-7000-00-1: Use 1 level teaspoonful Terramycin Soluble Powder (TSP) per ounce of powdered sugar per colony as a dust or 1 level teaspoonful per 5 lb jar containing 1:1 sugar syrup per colony. In addition, when making syrup it is advisable to first dissolve the TSP in a small amount of water to facilitate mixing. Because TSP is soluble, some have experienced trouble using it as a dust formulation in humid environments.

With reference to dusting, the label says to mix 1 lb TM-10 (a different product from TSP) with two pounds of powdered sugar, then apply one ounce of this mixture per feeding. Applying the dust on the outer parts or ends of the frames and feeding the syrup in pails is suggested. Usually three feedings or applications (either syrup or dust) at 4-5 day intervals are required in the spring and/or fall at least 4 weeks before the main honey flow to prevent contamination of marketable honey.

Remember: Laws governing agricultural chemicals are continually in flux and new products are periodically available which can make previous labels and/or recommendations obsolete. It cannot be overemphasized that only instructions as they appear on the label should be followed when using any chemical product either in disease and/or pest and predator control.

The symptoms of European foulbrood include:

– A resultant black scale, often twisted or contorted in its cell and easier to remove than American foulbrood scales.

Diagnosis of European foulbrood is almost the same as that for American foulbrood. The ropy test shows less stringyness or ropyness (subjective at best and not considered definitive diagnosis), and the Holst Milk Test does not result in a clearing of the solution. Again, the bee inspector’s on-site diagnosis is recommended, and samples may be sent to the Beneficial Insects Laboratory.

Transmission of European foulbrood is the same as for American foulbrood. Again, it is recommended hands and hive tools be kept clean of debris (wax, propolis) when working a number of colonies.

Treatment of European foulbrood is generally less drastic than for American foulbrood. Only in very severe cases is burning resorted to. Generally, requeening with more resistant stock will clear up the disease. This provides a break in the brood cycle and introduces new genetic (possibly more resistant) material into the colony. In addition, routine prophylactic with the antibiotic oxytetracycline (Terramycin) is effective for prevention of European as American foulbrood (see section above on feeding antibiotics).

The amount of stress a colony is under can often be correlated with development of European foulbrood. Symptoms may appear when a large amount of brood is being reared or during nectar dearth. The role played by good management technique, therefore, which reduces stress on a colony cannot be overemphasized in controlling European foulbrood, as well as most other diseases in bees. 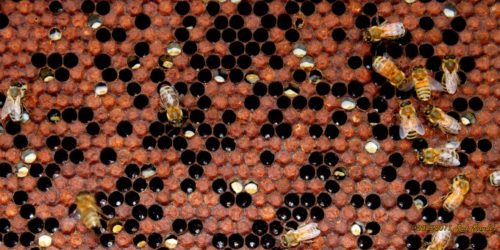 Chalkbrood is a fungal disease. Although considered by many to be a relatively minor disease of honey bees, it appears to be on the rise in much of the United States, and some geographic areas in Florida have reported large infestations. The disease is characterized by infected brood, called “mummies,” which when removed from the comb, appear to be solid clumps, reminiscent of chalk pieces. The mummies can vary in color from white to dark gray or black (when fruiting bodies are present).

It has been suggested importation of pollen from abroad is correlated with the increase in incidence of chalkbrood, a fungal disease. Growth of the caustive organism, Ascosphaera apis, appears to be enhanced by a number of factors, including high moisture content (colonies not well ventilated in high humidity situations), cool temperatures and colony stress.

There is no recommended chemical control for chalkbrood; often requeening a colony will be effective treatment. Good hygienic behavior by a colony, that is quick removal of the mummies by workers, appears to aid in clearing up the symptoms. Although it remains somewhat of an enigma, some generalizations appear to be in order concerning chalkbrood according to most authorities:

– It occurs mostly in colonies expanding during the summer.

– It rarely kills a colony, but will weaken it, leading to a reduction in honey surplus.

– It is spread mainly by beekeepers.

– It appears that requeening with resistant bee stock is the most likely way to clear up the symptoms.

Besides chalkbrood, another disease called stonebrood has also been identified. This disease is presently of minor importance, but should not be totally ignored by bee inspectors and beekeepers. The causitive organism may be one of several species of Aspergillis. As with chalkbrood, no control has been developed. 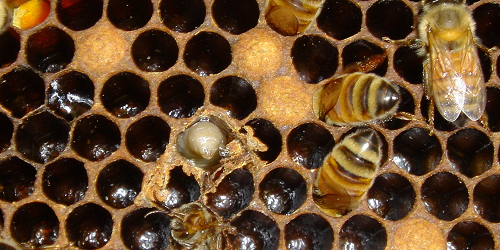 Sacbrood is a viral disease of the brood and considered of only minor importance. Affected larvae appear to the observer when removed from the cell to be a water-filled sack, hence the disease’s name. There is no recommended control for sacbrood.